In the 1970s Anthony Burton wrote a book and presented a TV series entitled Back Door Britain. It told the story of the English canals: their history and role in the Industrial Revolution. The title was particularly apt. Entering a city by canal always felt like using the Tradesmen' Entrance. Even in conurbations like Birmingham and Wolverhampton where ribbon development has merged these cities with all their suburbs,  on the canal each suburb and town was distinct, separated by parks, woods or allotments.  Those houses which did border the canal quite resolutely turned their backs to the water. Gardens, in those days, from the canal, resembled rubbish tips, each with a broken down shed, a fridge or oven and a bedstead.
During the 1990s we started to see people wake up to the attraction of a canal at the bottom of the garden and the rubbish was replaced by lawns with open vistas. Sometimes chairs and tables appeared. During this time housing development started to imitate the ribbon pattern of the road system. But the houses still faced away from the canal.
Occasionally adjoining houses worked together to create a canalside patio. 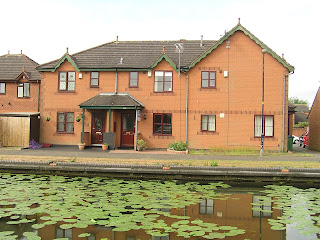 Very welcome, but rare, are houses which face the canal, usually with a service road in  between. 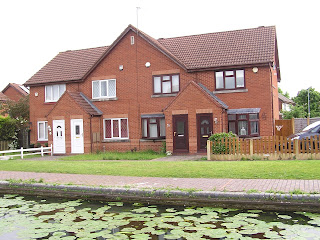 This development alongside the Old Main Line on the BCN has gone further by removing all obstacles to incorporating the canal into the front garden.
Posted by Peter at 23:28