A Load of Bollards

The forecast is for thunder and rain this afternoon so we set off early  in order to descend the Lapworth locks and moor up before the weather breaks. We moored last night a couple of miles from the top lock, near Hockley Heath, where the post office still observes early closing on Wednesdays. So our parcel did not get posted. 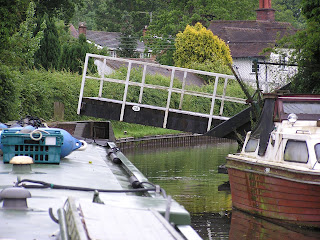 In less than 30 minutes we came to a premature stop when this lift bridge would not lift. The mechanism is hydraulic and no matter how much winding we did it would not give us sufficient headroom to pass beneath. Finally we lowered it and started again. This time successfully.

Some of the features of this flight of locks are: 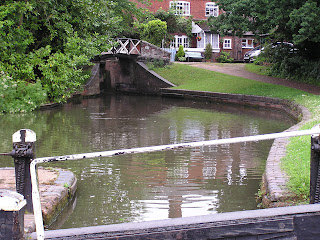 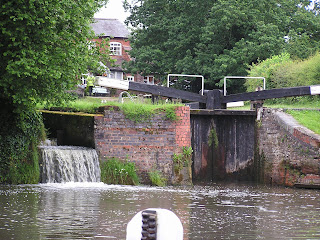 Large bywashes  making it difficult to enter or leave a lock smoothly. But loking very pretty, I am told 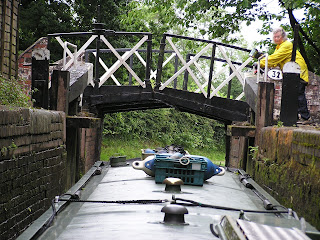 And this rather elegant split bridge designed to allow a horse to tow a boat through the lock without disconnecting the rope. 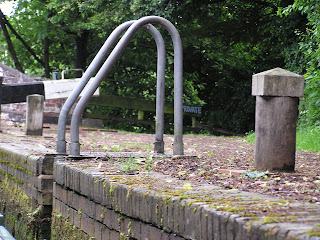 Back in 2009 BW spent £1,750,000 installing three bollards alongside every narrow lock in their network. This unnecessary and dangerous activity was due to an erroneous interpretation of a risk assessment.  Initially hte bollards were like the one furthest from the camera in this picture. Then someone decided they all needed tops on them, as in the closer one.
They were unnecessary because it is  quite easy to negotiate such locks with one bollard should you really feel the need for one.They are dangerous because they clutter up the lock side and they encouraged novices to tie boats up and think all was well. This resulting in descending boats being hung up on lock walls and ascending ones sitting on the cill. Within a few weeks a boater was injured when he tripped over one of these new bollards on the Wolverhampton 21. 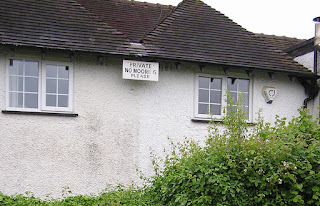 This sign is on a house on the towpath side of the canal. It is not uncommon for people to buy property next to a canal and then complain about the boats . It seems rather presumptuous to claim private ownership of the towpath: riparian rights on canals lie with the canal company, unlike on a river.

We accomplished our target of mooring up below the Lapworth flight before the rain arrived.