I am always wary of claims such as this and have found it difficult to tease out the facts from the myths on this particular subject so am quite prepared for a rebuttal.
Middlewich, of which I have written before, has a busy canal junction where the Trent & Mersey and Shropshire Union Canals meet. 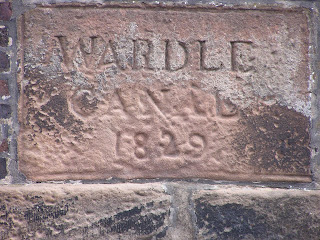 Or do they?
Whilst waiting for the SU lock to be prepared for your ascent from the T&M, look up at the bridge and you will see this engraving.
And below it is a cast iron plate sating that this is the shortest canal in England: 154ft long apparently.
Originally the SU Canal Middlewich Branch ended at Sutton Lane and did not connect with the T&M whose owners jealously guarded their canal route. Freight at that time would have been offloaded from the boats one one canal  and transshipped to the other. But in the 1820s railways were appearing and it was in both companies' interest to eliminate the wasteful transhipment activity.  After much heated discussion the T&M built this short connecting canal which opened in 1833.  So why does the inscription read 1829?  Well that was the year it was started.  The delay in opening I suspect was due to the inter-company animosity.
In my research I encountered many conflicting 'facts'  One canal planning website claims the maximum boat dimensions as 72ft x 10ft  The bridge is at least 14ft wide and the lock is 7ft so how far would a boat of these dimensions get? I have also read that the length is anything from 150ft to 150yards. Using the length of our boat as a guide I tend to believe the 154f measurement.
One last puzzle: why was it named Wardle Canal?  The only explanation I have found is that due to the animosity between the two canal companies a neutral name was deemed prudent and it was named after the lock-keeper. Any takers on that one?
Posted by Peter at 08:47