What Four ?!?!?
The water shortage on this canal is making it difficult for us to find moorings. We arrived at the top of Bingley five-rise yesterday afternoon and could not get the stern any closer than four feet from the bank. This was at ten to three and I was listening to the play on radio four so we tarried awhile before tackling the problem. A chat with the lock keeper confirmed that the last descent of the staircase was under way and that if we were prepared to start down at nine this morning we could moor on the lock bollards. Of course, once the locks were closed the water level rose overnight and we were floating quite nicely by the morning. Our partner in the locks was to be a considerably shorter boat - Tom Pudding - who we had seen at Gargrave just after being blacked but when this morning dawned their starter battery was dead and we had to descend alone. 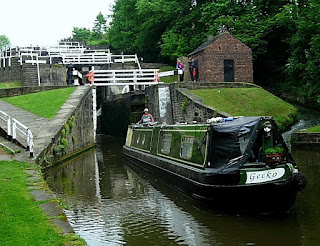 In the event this was quite useful as we are finding these locks a little short. The problem when descending is that to allow the bottom gates to be opened it is necessary to pull the boat right back to the cill but the top gates are so leaky the water cascades over the counter. With she who must be obeyed taking orders from the lock keeper (hurrah) we completed the five locks in 30 minutes. 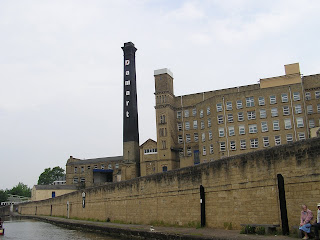 A few hundred yards later we descended the three-rise next to that famous manufacturer of warm undies.
This was followed by a two-rise staircase and a singleton.

Our run for the day, therefore being 5-3-2-1. Which reminded me of a joke John Cleese made during an interval in a recording of Monty Python which we attended back in the 1970s.
Dad is surprised in the shower by young son...
Son: Dad, what are those for?
Dad: Four?!?! 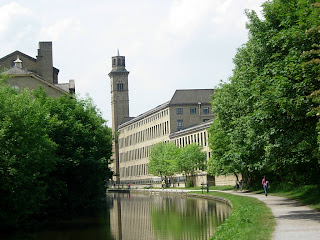 The water here is quite clear so we have a good view of the rocks which prevent us mooring by Salts Mill at Saltaire and we eventually found a spot on the offside.
Posted by Peter at 20:55