Lest we forget
Water levels are down and BW has introduced restrictions on lock operation. Today we have a lock-free day as we travel from Skipton to Bingley. Lock free it may be but seventeen swing bridges make up for the absence of locks. 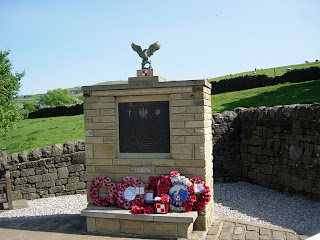 By one of these swing bridges - number 183 - there is a monument to seven Polish airmen who died near here in September 1943.
Returning to Cumberland from a routine training flight, the port wing and engine fell off their Wellington Mk XI bomber when a spar failed and the plane plunged into the ground at a point known locally as Winifred's Gate. The airmen were aged 21 - 31 and one had been married only three weeks. When this memorial was inaugurated in 2007 his widow had been traced and participated in the ceremony. 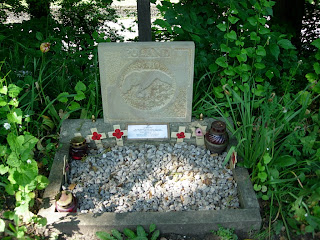 Fifty yards further on there is a smaller but more poignant memorial at the actual site of the crash. This was created by local Poles and is tended by them.
Posted by Peter at 22:50