Robin's nest
For T L Williams 1935 was a big year. On the 1st of January he registered and licensed his new creation - the Reliant 3-wheeled van.

A former works manager at Raleigh, he probably chose the name because many of the components he used bore the R for Raleigh.
This first vehicle was a 7cwt van powered by 600cc Jap engine.
In 1937 the Austin 7 engine was introduced.
Reliant went on to produce a range of three and four wheeled vehicles in Tamworth over the next 65 years. Probably the best know was the Robin. This was introduced in 1975 and continued in various forms until Reliant closed in 2001.

If you have been paying attention you will be aware of the connection with Tamworth of the Peel family. Here is another link (if tenuous) between Tamworth and the Peel name.
The smallest production three-wheeled car ever was the Peel P50. Built in the Isle of Man in 1963 it was 4'5" long (that's about 1500mm) and was single seated. Fewer than 100 were built and there were many variations within that number. All were powered by 49cc two-stroke moped engine from DKW.

But who would you like to see in one?

How about J. Clarkson, Esq? 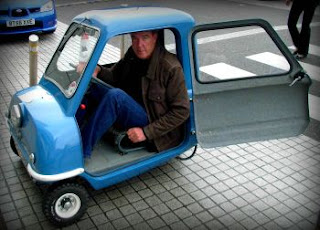