That's how I remember the nursery rhyme
However I recently came across a very different version:

Ride a cock horse to Banbury Cross,
To see what Tommy will buy.
A little white loaf and a little white cake,
And a tuppeny apple pie

But what is a Banbury cake? Isn't it just an elliptical Eccles cake ?
That is a dangerous question to put voice to in Oxfordshire. There are (apparently) well documented references to the Banbury cake two centuries before the suburb of Manchester put its name to the Eccles cake. When they are full of currants, as I believe they should be, I am partial to either offering. The travesty which most bakers produce is hardly worth the effort of making. For the original recipe (take four pounds of currants.....) go to http://www.katjaorlova.com/Banbury.htm 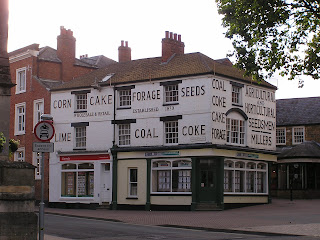 I found it difficult tracking down a shop in Banbury where I could buy an authentic Banbury cake.

Somehow I don't think the cake referred to on this building was quite what I was looking for.

Unfortunately in the canal world Banbury is more famous for its reputation in the 1980s of being the place to avoid mooring if you were not looking for a fight. We have been reminded of this recently by two incidents of boaters being assaulted on their boats whilst moored in the town centre.
Posted by Peter at 16:46