You Can't Trust Numbers
On the way from Coventry to Sutton's Stop there has been considerably development over the past 20 years including a giant Tesco store and the Ricoh Stadium which I understand is something to do with a game called football. There is also a terrace of houses which proclaim themselves a "Eco Houses" Apart from the very large letter E on the end of the building and the solar panels on the roof they appear fairly traditional. 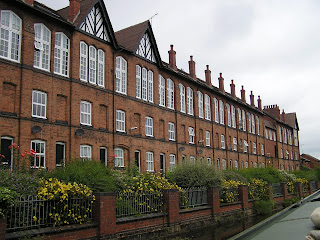 When we were at school it was customary to sew name tags into all items of clothing which were considered at risk of being lost. These tags came from a company called Cash. Apparently they were woven in Coventry and alongside the canal there is a terrace of houses called locally Cash's 100. These three-storey buildings comprised accommodation on the lower two floors and weaving rooms on the top floor. All the weaving looms were powered by a single steam engine housed at the end of the terrace, power being transmitted through shafts and pulleys. This project was certainly ambitious as there were only 48 houses built, not 100. Now there are only 37. 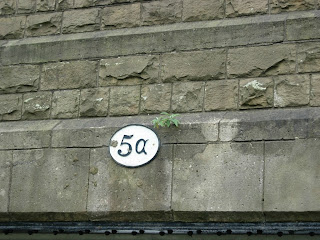 Generally bridges over canals are numbered in sequence to aid location of boats in the absence of other landmarks. As rail and road transport developed it has been necessary to add numbers in the sequence, usually by the addition of a letter. This has led to some peculiar sequences when bridges are inserted between those already bearing a suffix. Usually the number plates are in cast iron and painted in white and black.
On this bridge the forge appears to have utilised the top of the number 8 to create a letter a (or is it intended to represent alpha?)
Perh8ps there is 8 short8ge of letters in the Coventry are8.
Posted by Peter at 15:19