Bang!
On 2nd October 1874 at around 5am one of six barges being towed though Regent's Park exploded whilst passing under Macclesfield Road Bridge. The barge was completely destroyed and the crew all died. All that was left of the bridge were the iron supporting columns. The explosion was so loud that it woke residents ten and twelve miles away. What caused the explosion is not certain but a spark from the steam tug is the most likely culprit. The cargo off the ill-fated barge, Tilbury, included nuts, tea, strawboards, petroleum and five tons of gunpowder from Waltham Abbey. (see blog of 26 April 2008). Since that date it has been customary to use the statement May contain nuts as a warning wherever appropriate. 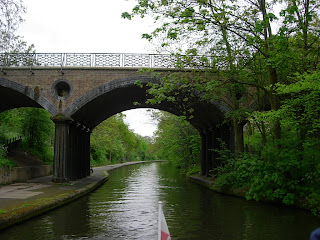 The bridge was rebuilt on the original columns and is now known as Blow-up Bridge.
The ten iron pillars were cast at Coalbrookdale and in the rebuilding they were turned round so that the rope marks from before the explosion can be seen on the side away from the canal whilst those made subsequently are on the canalside as one would expect.
Posted by Peter at 20:48