Lee Enfield
Yes the Lee Navigation goes through Enfield and if you are in the market for an elegant lock cottage the one at Enfield is unoccupied. 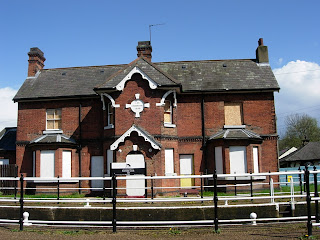 Yes the Lee Enfield rifle was manufactured here at the Royal Small Arms factory.
However the name has nothing to do with the navigation. This phenomenally successful gun was developed by James Lee in 1907 and was standard issue to infantrymen in both World Wars. To appreciate the impact of its ability to achieve 12 well aimed shots per minute in the hands of a trained infantryman consider this. At the battle of Mons the Germans estimated that 28 machine guns per battalion were being deployed against them. In fact there were only two.
Posted by Peter at 21:37