WADIHS on the Wendover Arm

Last Saturday, Aug 30, about twenty members and friends ofWatford & District Industrial History Society (WADIHS) were treated to a guided walk & talk along the Wendover Arm of the Grand Union Canal. This was organised by Wendover Canal Trust (WAT)and started from St. Mary's Church in Drayton Beauchamp. Before the guided visit to the restoration work, home-made cakes and coffee were provided by the ladies of WAT. In preparation for the walk  Ray Orth of WAT gave a short talk on the restoration work putting it into the historical context of the Grand Junction Canal. 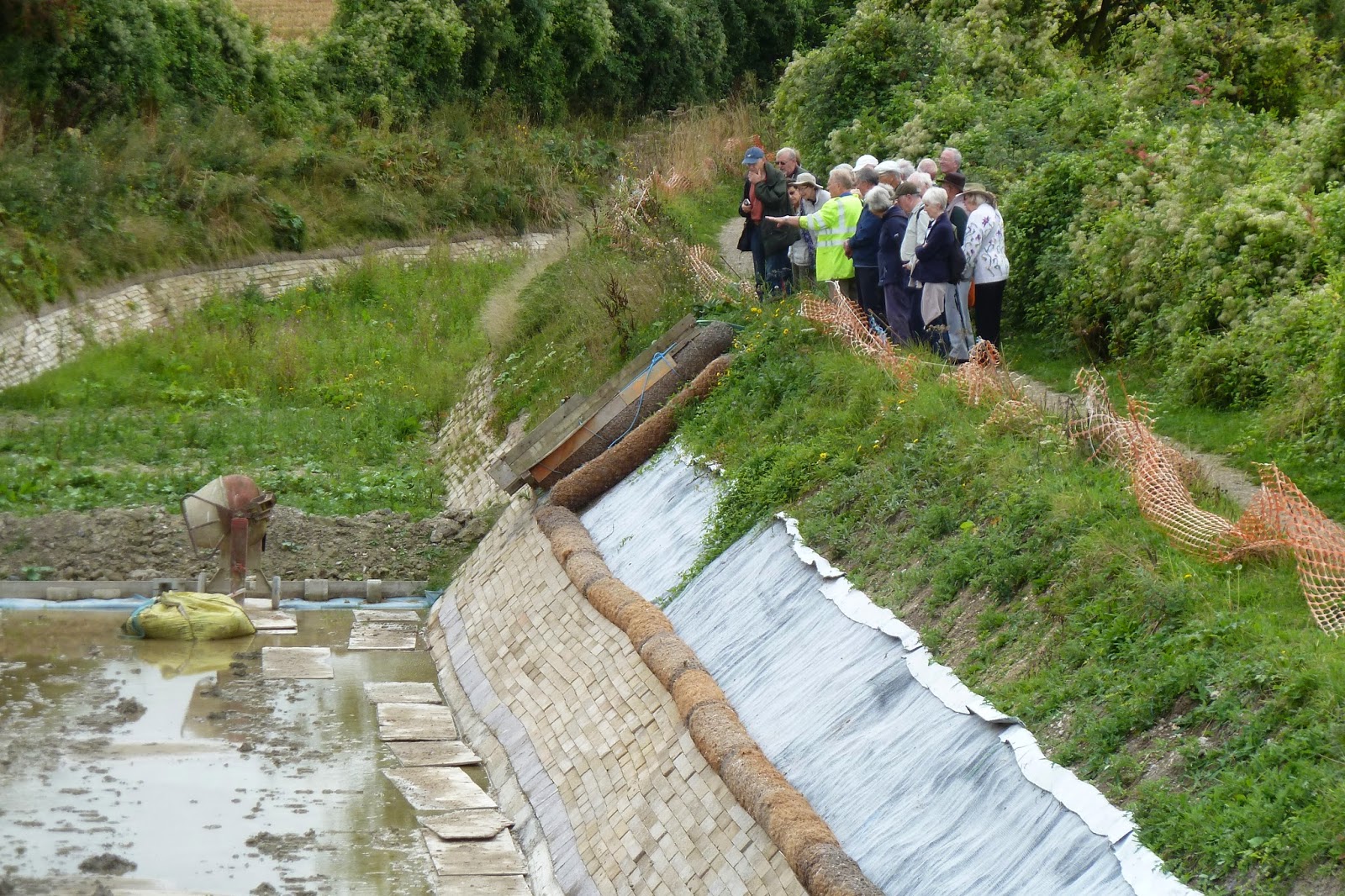 Built originally to channel water from  the springs around Wendover to meet the main line of the Grand Junction Canal at Bulbourne, it follows the 391ft contour which is about 20ft higher than the top of  St. Paul's Cathedral in London. Soon after work started it was realised that for another £13000 it could be made navigable for which authority was granted in 1794. This water feed is critical for the GU Canal asTring Summit, which it supplies, is the main source of water  for all boat movements between Milton Keynes and the Thames. Every boat which crosses Tring Summit takes 100,000 gallons of water with it. 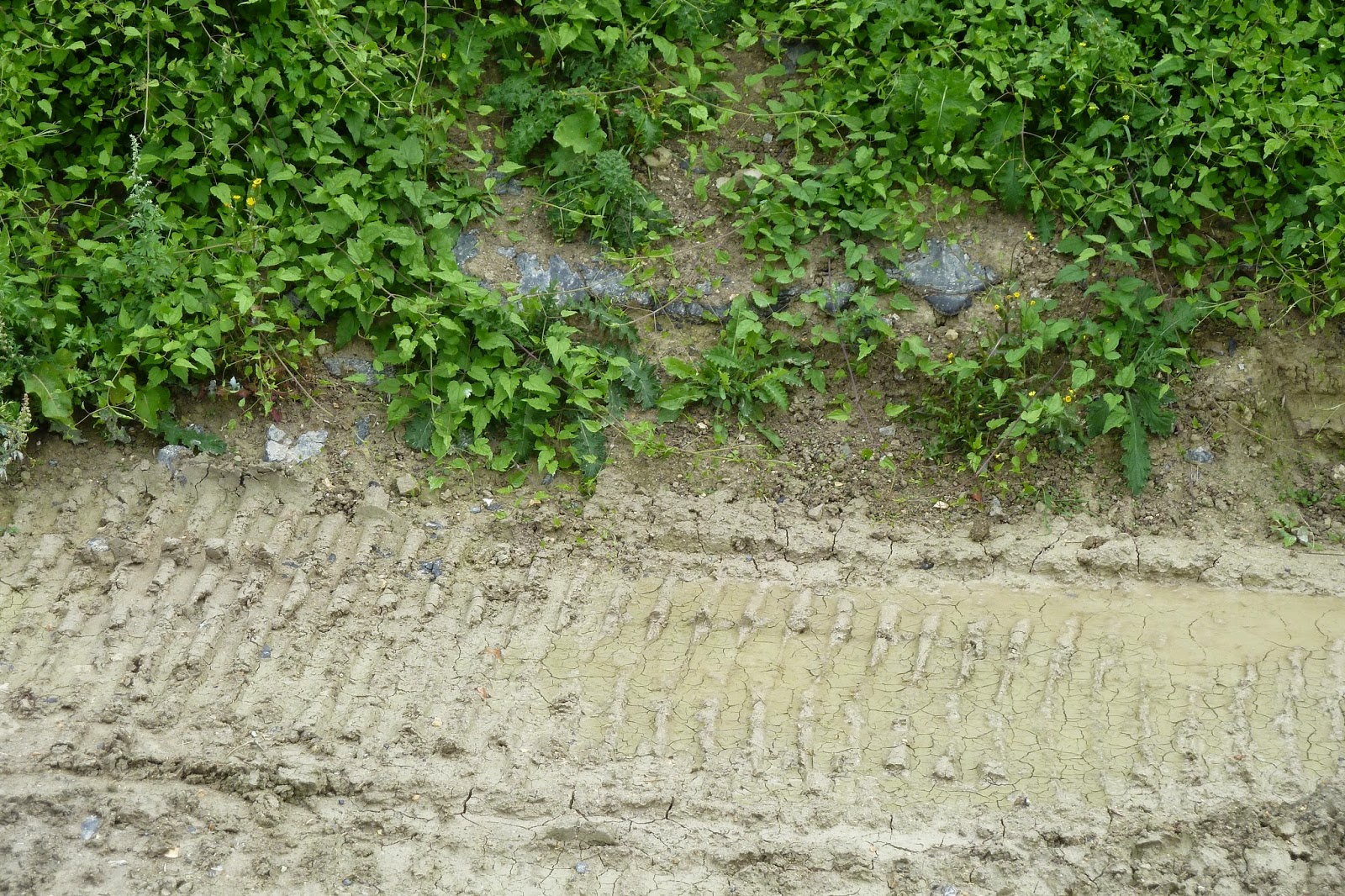 Soon after completion of the Wendover Canal it was found to leak and for over 100 years various measures were taken to remedy the situation. One method adopted was to lay asphalt. The coal tar, a by-product of the gas industy,  was brought in by boat and  mixed with ash on site. It was  layed across the bed of the canal but provided a very short-lived improvement before it failed. In some places remains of the asphalt are still visible amongst the weed growth on the banks.
A full history of the canal can be found on the WAT website 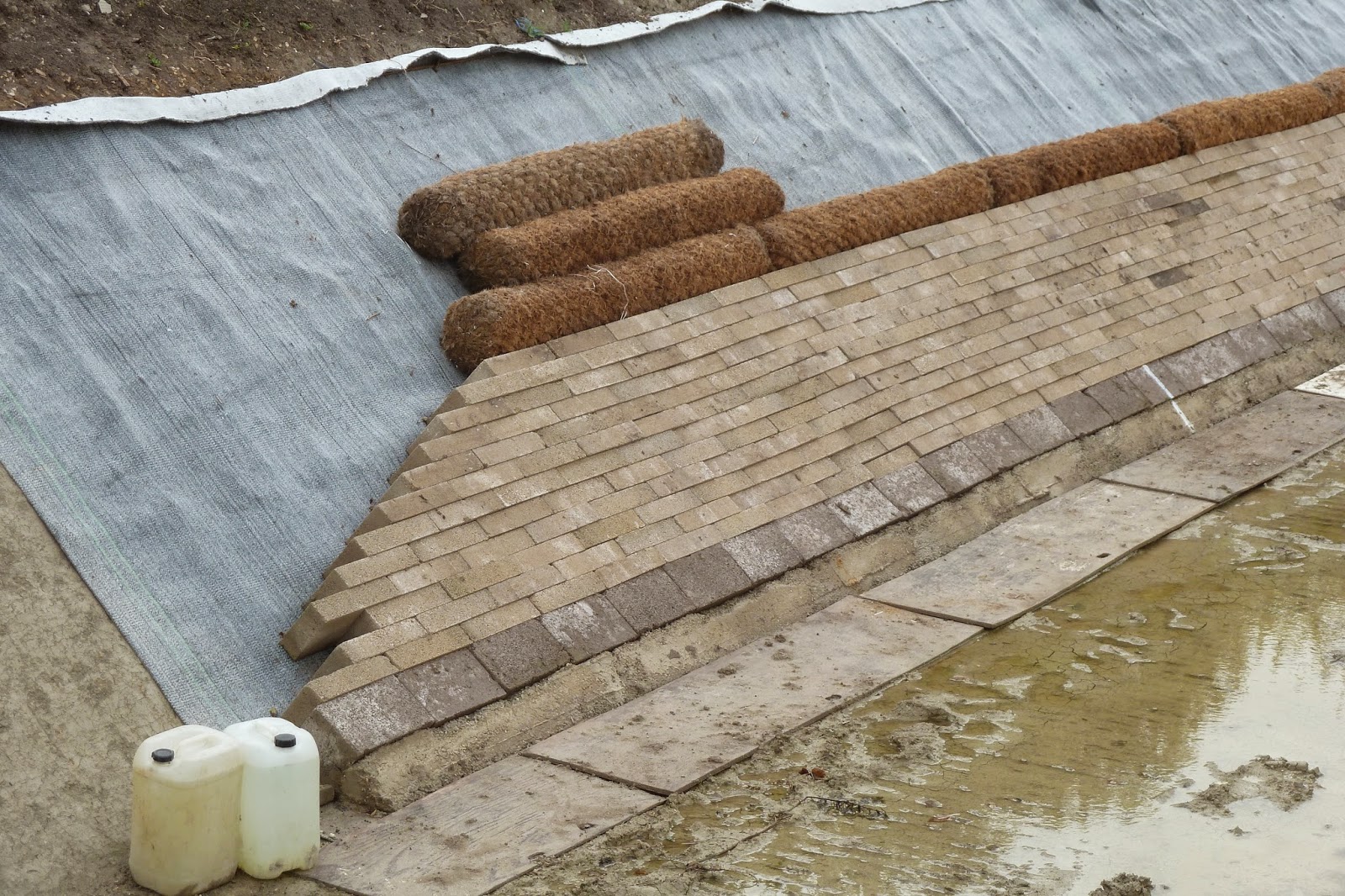 The restoration process involves laying a waterproof membrane of Bentomat. This comprises two sheets of a porous fabric with small granules of clay sandwiched between. When water comes into contact with the clay granules they expand  to form an impervious layer. Below the intended waterline concrete blocks are laid to stabilise the bank: above the waterline coir rolls are used to encourage vegetation. This provides a habitat for small animals and plants whilst softening the line of the canal bank.
In 1973 Little Tring bridge was demolished as the local council had decided it was too weak to carry modern traffic. Despite considerable local protest the wrecking ball was brought it. The first swing at the bridge bounced off so decisively that it could not be used safely and the bridge was dismantled brick by brick. Then, as now, it is not possible for  anyone in authority to admit they were wrong and an embankment was constructed cutting the canal off completely about a mile from the main line. 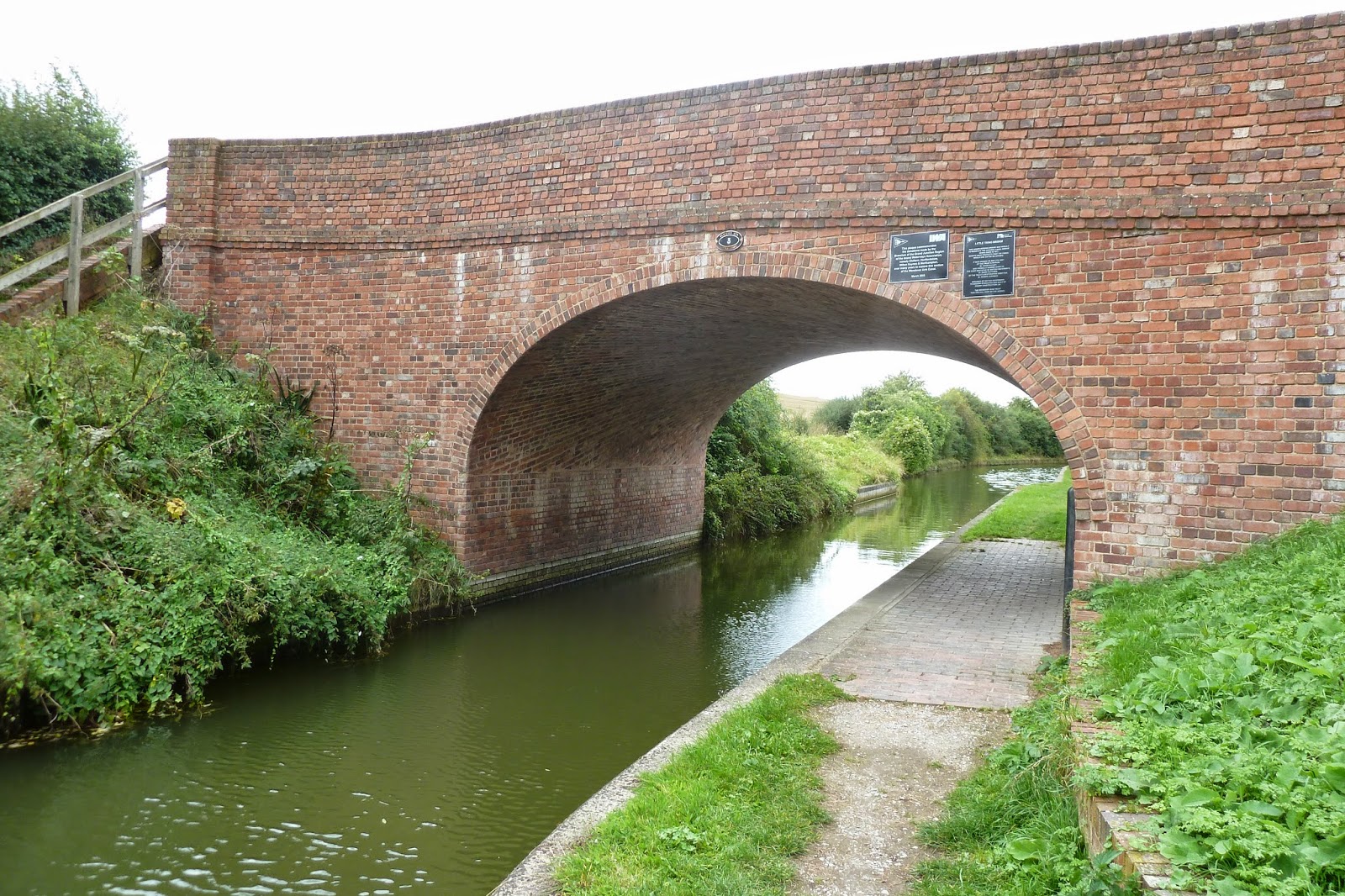 One of the major achievements of WAT has been this lovely replacement of this bridge.  (at a cost of £260,000)


A picture of the original bridge is available on the WAT site from which you can see how faithfully they have recreated it in solid concrete with brick facing and parapet.
From here it is but a short walk to Tringford Pumping Station where we were given a guided tour by John Kearsy, the southern region water resources manager for C&RT, who came off his holiday for us.
Once the canal was closed completely in 1904 the reservoirs, which had been built as boat traffic increased the demand for water in the summit pound, were able to do their job without water draining away down the Wendover Arm.  By this time the management of water had become quite complicated and other pumping stations, notably one at Whitehouses, were built to augment Tringford.
Originally powered by a Boulton & Watt steam engines, all pumping is now electric. The annual electricity bill for this operation is £30,000.  When the Wendover Arm is restored completely this will all be saved. There seems to me to be an incentive for C&RT to assist in the restoration work.
Untill C&RT sees the sense in this, WAT  has to rely on cash donations and an ever ageing band of volunteers. 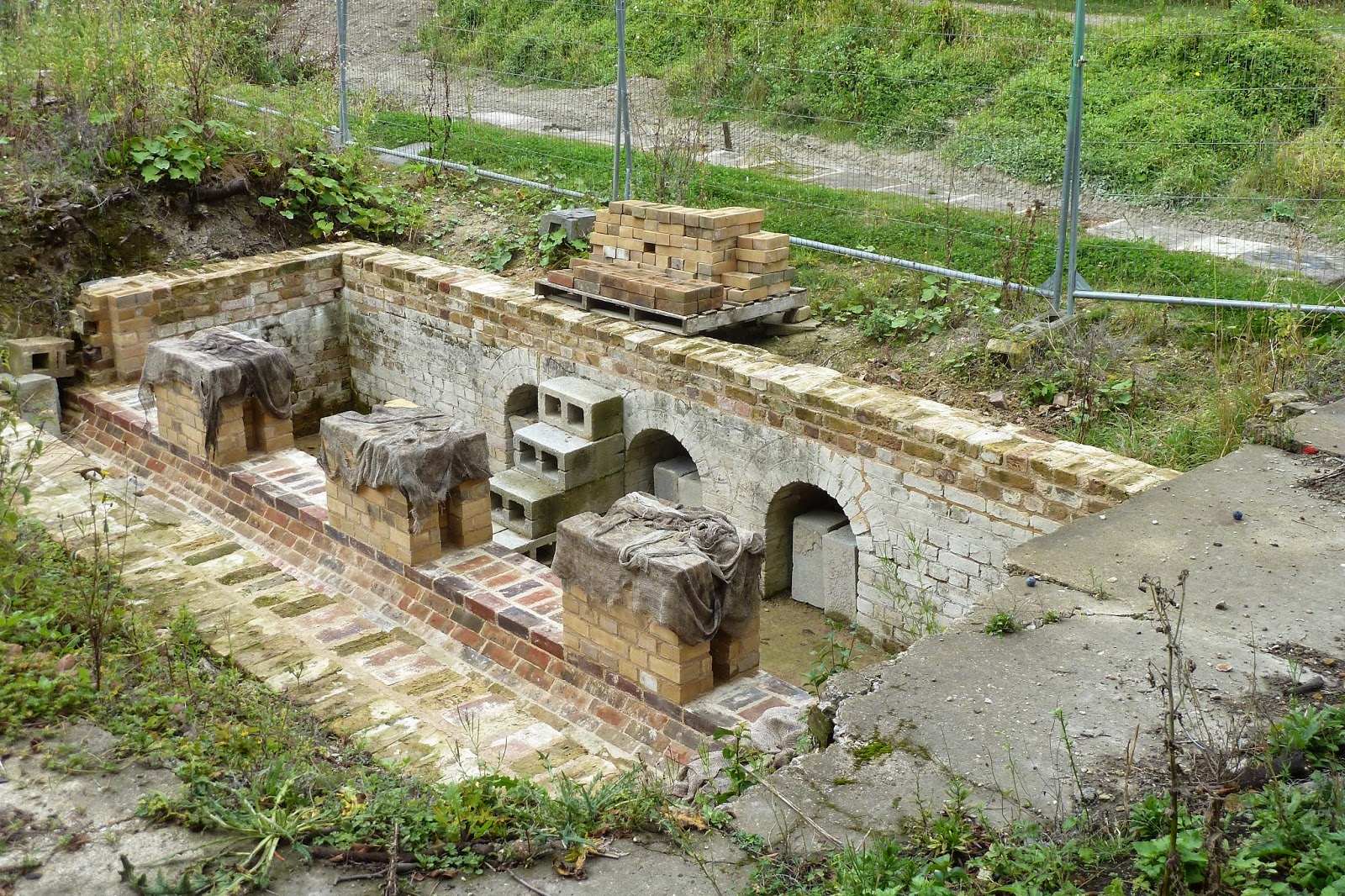 The remains of Whitehouses Pumping Station which C&RT will restore to working order. 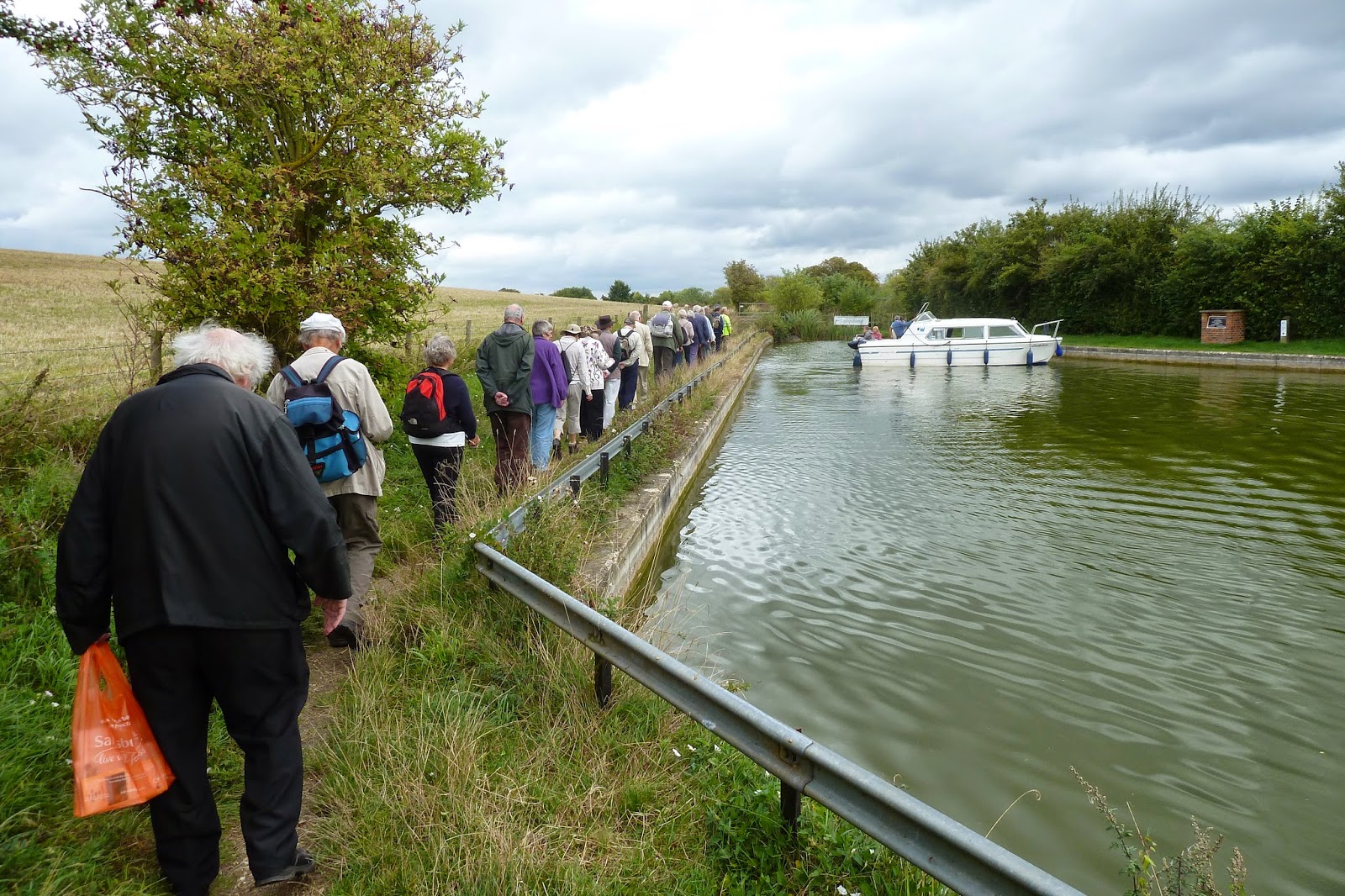 As we walked round the end of the restored section a launch came up to wind.