This is not a new protest campaign.
The canal 'network' in England was never designed as such.  Although James Brindley  dreamt of the 'Silver Cross' of canals linking the rivers Trent, Mersey, Severn and Thames most canals were built by local people to satisfy local needs. The Duke of Bridgewater built his canal in 1759 to transport the coal from his mines in Worsely to Manchester more cheaply than by road. Where a longer canal was mooted, such as the Trent and Mersey, its supporters all had their own personal axes to grind: one of the original proposers was Josiah Wedgewood who sought an improved method of moving fragile pottery from Stoke-on-Trent to the rest of the country. The success of the Bridgewater Canal stimulated a mania for canal building and dozens of canals were built in the next half century: many more were proposed but did not get built. There is one over-riding rule of canal operation which was difficult to avoid: water  travels downhill.  A constant water supply is required to feed the canal but, whether it comes from reservoirs or rivers, it always drains away at the bottom of the hill. The route which Brindley surveyed from Worseley to Manchester has no locks and crossed rivers by aqueduct.  Very few subsequent canals were able to emulate this and so locks were employed to carry boats up and down hills. Whilst this enabled boats to climb hills it did not prevent the water from heading the other way.  Water supply, therefore, became critical to the success, operationally and economically, of any canal. The individual canal companies were very protective of their water supply and when a new canal proposed linking its route to an existing one protection of each company's water supply was high on the agenda. 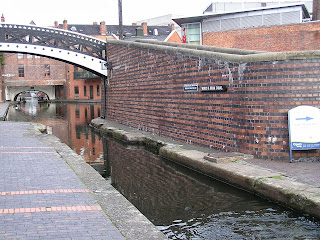 This narrow channel in Gas Street, Birmingham is known as Worcester Bar.  When the BCN and the Worcester & Birmingham Canals met here goods were unloaded from one canal and transshipped to the other across a short land barrier: there was no water connection between the two canals!  Later this costly and inefficient practice was abandoned when a pair of lock gates was installed ensuring that a lock full of water passed from one canal to the other only when accompanied by a boat. This too has been abandoned now and the water is free to go where it will. 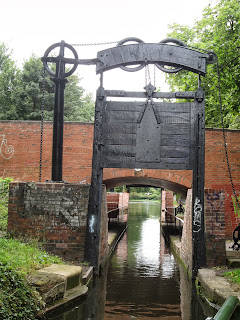 A short way out of Birmingham this guillotine lock prevented Worcester & Birmingham water from taking the Stratford-upon-Avon canal down to the River Avon.

Stop locks were employed all over the system: wherever two canal companies met they were used. 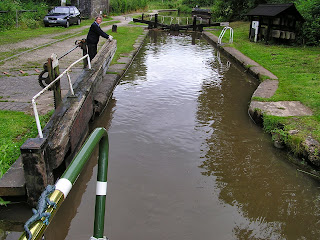 At the southern end  of the Bridgewater Canal, where it meets the Trent & Mersey the stop lock not only controls the water but also prevents broad-beamed boats which can operate to the north from entering the T&M canal by tapering the lock chamber. 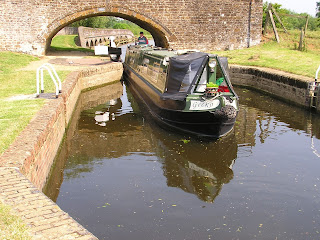 This device for keeping two bodies of water apart is also employed where a canal and river meet.  Rivers have a tendency of changing level and flow, characteristics not common to canals. 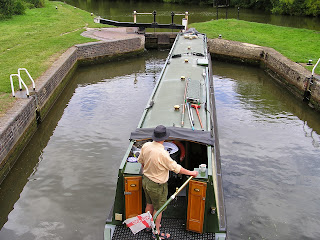 The southern Oxford Canal is joined several times by the River Cherwell and these lozenge-shaped locks prevent changes in the river conditions from affecting the canal. 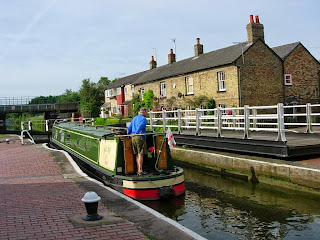 Tomorrow we will pass through this stop lock at Fenny Stratford.
This was not built to protect one company's water supply from another: it is in the middle of the Grand Union Canal.

When the canal was built, work started at various points on the route and each team of navvies worked towards the others.  When they met at Fenny Stratford it was discovered there was a discrepancy in the level of the two navigations.
Oops!