Our friends Maggi and John popped in to see us today on their way south from Edinburgh and we went out for dinner.  After much deliberation we settled on The Anchor Inn in Salterforth. One does not usually associate anchors with the canal although, after the waves whipped up by gale-force winds this morning, we might review our mooring equipment. 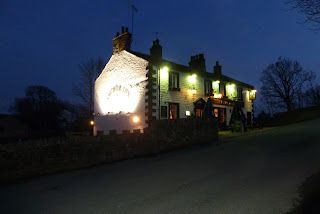 When the canal was built in the early nineteenth century this inn was on a drovers' road and was one storey shorter than it is now.  The canal embankment obliterated the road and the ground floor of the inn: the first floor became the new ground floor and another storey was built on the top. 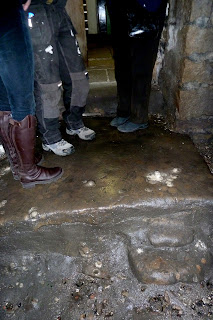 As you travel south in England the price of pub meals increases  whilst the chance of home-cooked food decreases. After a superb meal we were treated to a tour of the old ground floor. (now the cellar)

The original front step can still be seen but now it leads down to a cellar under the new (200 yr old) road.

Over the past 200 years water has seeped through the lime mortar of the cellar roof and created the most amazing hollow fillament stalagtites.

Some of them have now reached the floor and merged with their stalagmite counterpart. 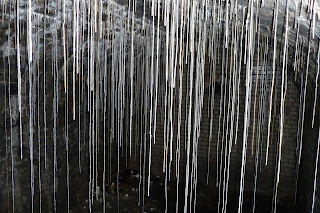 On our way home in the dark and vigilant for any new dog poo we encountered a new hazard: jumping turds.  Closer inspection revealed that I was not suffering from too much Thwaites Wainwright Bitter: it was frogs' night out. 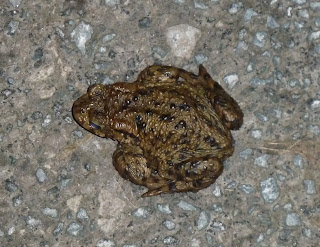