After the gales on Tuesday which we decided to sit out after the most hair-raising descent of Greenberfield Locks, the long pound to Bank Newton was glorious - not sunny, but the views were still magnificent.  We met only two boats all day and had no-one to share the nine locks which took us to Gargrave. Fortunately there was a lock-keeper on hand at Bank Newton to assist as one lock we could not open because the water level in the pound above it was so high. 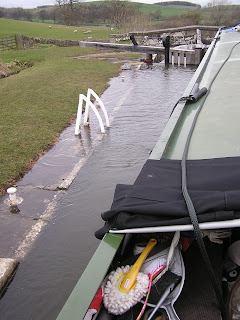 At Stegneck Lock the water was so high it reminded me of our first descent of the Rochdale Nine in a hire boat thirty years ago.


Soon after mooring in Gargrave the gales returned.  Overnight it felt like we were at sea. 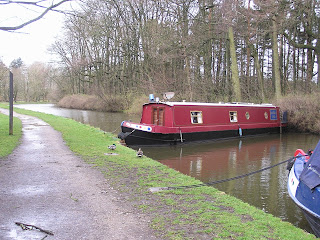 And this morning one of the unoccupied boats behind us had loosed its stern mooring and was across the cut.

Recovering and retying that delayed our bus trip to Settle, but at least it didn't rain on us.