Year of the Rabbit - The Legend of the Jade Rabbit 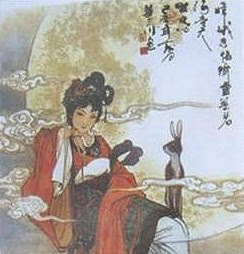 In this legend, three fairy sages transformed themselves into pitiful old men and begged for something to eat from a fox, a monkey and a rabbit.
The fox and the monkey both had food to give to the old men, but the rabbit, empty-handed, offered his own flesh instead, jumping into a blazing fire to cook himself.
The sages were so touched by the rabbit's sacrifice that they let him live in the Moon Palace where he became the "Jade Rabbit."
Posted by Peter at 02:06