Explorer Day 7 - The End
Despite many requests one Viking remained resolutely on the water point from 4pm until morning and still had all the curtains closed when we left just after 8am. I am sure we are not the first to find the Vikings difficult to remove. At least they were not raping and pillaging as far as we know.The run along to Titford was fairly uneventful. I do prefer Brindley's Old Line to the brash Telford New Line. As we entered the bottom lock of the Crow we received word that H on Jjinad was at the top which confirmed our calculations that he would be the first to arrive again today.
There are some rather handsome buildings up here -

The pumphouse which I believe is in working order but not in regular use Part of this is used as the BCN Society HQ and meeting room. 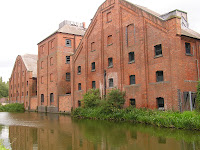 A little further up the arm is this rather grand old maltings which closed down about three years ago. What future it has I do not know but it would be a shame it it joined the piles of rubble which seem to inhabit much of Birmingham's industrial areas 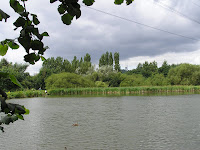 At the end of the arm are Titford Pools which you may not recognise as Birmingham if it were not for the incessant noise from the M5.

On our route back to the boat we discovered Langley Village. This may not be in the same league as the discoveries of Captain Cook or Christopher Columbus but we were rather impressed. This corner of Oldbury has a definite community feel about it. We must revisit it sometime . By the Cross Wells pub is a village sign with four sides illustrated here. 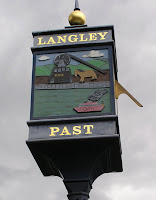 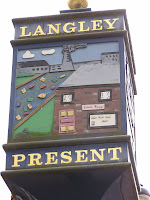 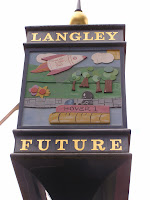 It is reassuring that the village envisages a future however bizarre.

And so we foregathered in the BCNS clubroom; made more burnt offerings to the great lock keeper in the sky; had a sing-song and said our goodbyes. What a grand week we have had and perhaps we will be able to go again next year.
Posted by Peter at 23:15