Forthe past few weeks we have been weaving our way along the S. Oxford canal. 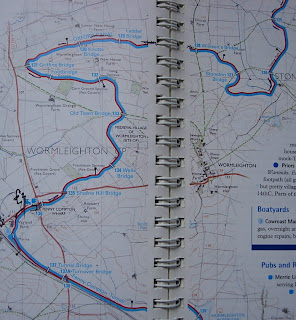 The summit pound is so convoluted that it should not be undertaken with a hang-over as there is a serious risk of permanent mental harm. The experience is made more exciting by the BW policy of not trimming vegetation proximate to bridges. There is also, apparently, an unwritten rule that if one boat sounds its horn on approaching a bridge it is not appropriate for a boat approaching from the opposite direction to respond in a similar manner as this spoils the fun. 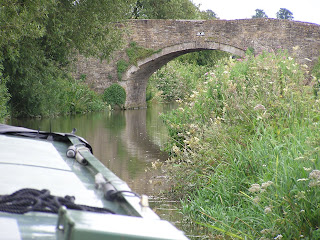 As you approach a half-hidden bridge (on a bend, of course) the suspense mounts – what will we find? Perhaps a Yellow Peril like the one which dented our bows on this very stretch last year by careering through a bridge with a man at the front holding a boat hook like he was jousting. Perhaps a yoghurt pot who thinks 20 tons of steel can stop in 4 feet as he can.

However there are many interesting sights on this canal: 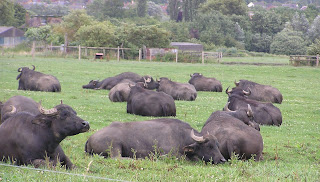 Aynho has a recorded existence back to the time of Edward the Confessor. Nearly all the buildings in the old part of the village are of local limestone, and most were originally thatched. The Cartwright Arms, an old coaching inn, was named after the family who were the squires of the village from 1616 to the 1950s. 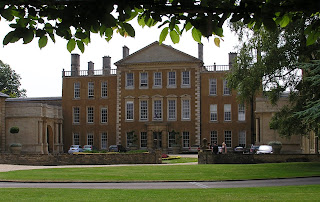 The original manor was burnt down at the end of the Civil War by the Royalist troops vacating the premises under the command of the Compton brothers. The troops had occupied the house on the retreat from the battle of Edgehill and retained it most of the time until the end of the war. Charles I stayed the night there on his way to Oxford after the battle of Edgehill. Charles II paid the family compensation after his restoration to the throne, and Park House was restored in 1680.

The church of St Michael and All Angels is built of limestone and the tower is 14th century. This was also damaged severely during the Civil War and the main body was demolished in 1723 to be replaced some time later.

The village hall was built in 1920 from stones taken from the ruined plague house in Pesthouse Wood. Plague victims were once isolated there, and villagers would leave them food every day at the boundary fence. 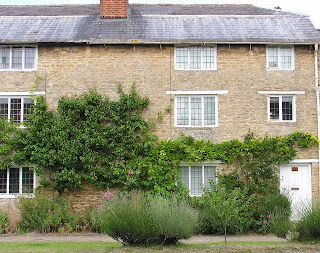 The Cartwright family suffered a tragedy in the 1950s when a car accident claimed the lives of both father and son. The bereaved sister also had to cope with double death duties which necessitated her selling the whole estate. When they had owned the village the Cartwright family planted apricot trees against all the cottages. Any fruit not required by the family was given to the residents.. 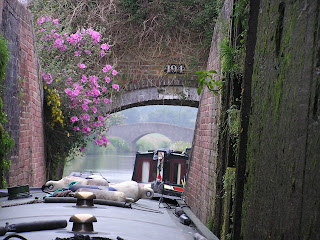 When She who must be obeyed opened the bottom gates of Sommerton Deep Lock I was confronted with this view.

How I was expected to get round the boat waiting to ascend the lock I am unsure.

On our return journey it took us two hours to get through the lock due to a traffic jam.N

Thrupp is not a disease! 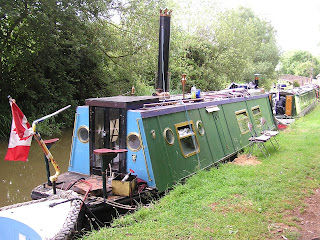 When we went to the wedding in France we left Gecko in Thrupp. We managed to get a space on the 14 day moorings as Martin and Steve on nb Chough were just leaving. Behind us was a small steam boat.

We also caught a performance by the Mikron theatre who travel around the canals putting on entertainment in pubs and gardens.

On our return from the ACS EGM (see To the Circus - July 11) Dave and Margaret came to stay overnight and when the rain cleared on Sunday morning we decided to leave the canal at Isis Lock and travel up the Thames to re-enter the canal at Duke's Cut. The weather was glorious until we rejoined the canal when the rain returned. 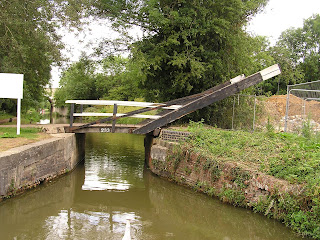 We met a few of these

As we approached Braunston we received calls from Nigel and Jeanette on Autumn Venture and Norman and Margaret on L'Attitude Adjustment each saying they were soon arriveing at Braunston. But that is another story.