To the Circus
A busy day ahead.
First we have to catch the bus from Oxford to Aylesbury to attend the Aylesbury Canal Society EGM called to consider the proposed move to a new marina to be built about a mile out of town at Circus Field
This is to be followed by Tea on the Lawns after which we have to get back to Oxford as Dave and Margaret are coming to stay for the night.
****
When we arrived in Aylesbury we were met by Nigel from Autumn Venture who informed us that a boat had come down the arm on Friday and they claimed to know us. This turned out to be Norman and Margaret on L'Attidude Adjustment who we have not seen for over a year. 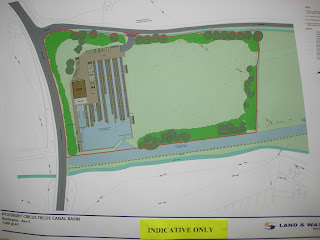 After availing ourselves of the shower facilities we went to the EGM where outline proposals to move the Canal Society out of the town basin and into a purpose built marina situated two locks up the arm were considered. At present the field is just that - a field - but it is zoned for residential development alongside the marina.
Having seen how new residents can impose restrictions on long established boating communities I am a little concerned over the proximity of the new houses.
Tea on the lawn was a very civilised affair with sandwiches, four varieties of tea, scones with jam and cream and home made cakes of all kinds. As we trundled back to Oxford on the 280 it was difficult not to doze off. Oxford greeted us with rain which grew steadily heavier as the evening progressed so we walked into Jericho with our visitors and had dinner in the Jericho cafe before turning in with fingers crossed for a fine morning.
Posted by Peter at 21:44