There are parts of London which live in different time zones from you and I and the wholesale markets are some of them. Back in the 1980s I worked in Goswell Road, London which is close to The Barbican and, more relevant to this story, Smithfield Meat Market Through the night lorries arrive from all over the UK with carcasses of beef, lamb, pork and more exotic fare. And in due course this meat is shipped out again to butchers and meat processors all over the country.  This is tiring and thirsty work which is recognised by the local licensing laws  which allow the pubs in Smithfield to open at 3am. From time to time colleagues of mine would arrive a couple of hours early for work and go to the pub for (a very meaty) breakfast. This usually included several pints of Guinness.  Work output on these days was always rather suspect both in quantity and quality.  I was reminded of this by two events: Farnborough Air Show which opened to the trade this week (our work in Goswell Road was defence electronics) and the line-up for the Saturday night ceilidh at Scarisbrick Marina Festival was a band called Beer for Breakfast.  To accompany this Irish group there was a hog roast. There was not much dancing but I guess that was because most of us had had a busy day around the marina. 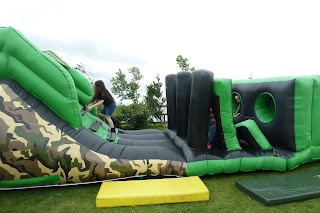 In addition to the usual bouncy castle the army had brought their assault course version for the larger kids. Unfortunately they said I was ineligible.After being rejected by the army I made my way to the marquee where I could hear music emanating.. This turned out to be a troupe of Morris dancers (is that the correct collective noun?) Very entertaining but a little too  stressful for my artificial hips. 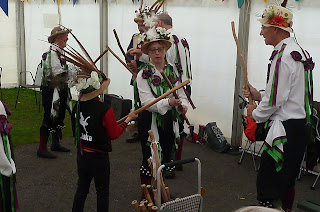 This was not an issue for some of the audience who were encouraged to join in. 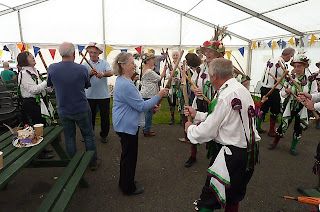 Even er indoors was tempted to trip the light fantastic.

I think she was attracted by wielding a stick. 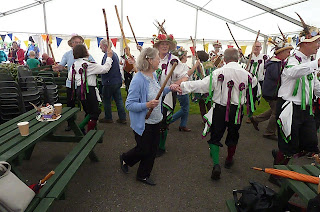 The vigour and enthusiasm she put into whacking the staves had me worried. 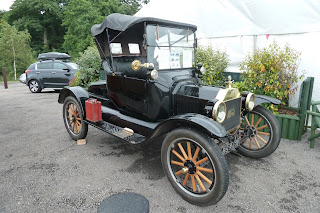 So I withdrew and went to admire the 1915 Ford parked up by the craft marquee.