Prat of the Day

After we all had a shower at Etruria yesterday we headed on to the Harecastle Tunnel. This is about a mile and a half long and passage takes about 45 mins. In the past southward passage was permitted in the mornings and northwards in the afternoon. This has all changed. Now batches of boats are listed and despatched in one direction wiht two minutes between each boat. Boats are logged into the tunnel with the details being phoned through to the other end for checking on exit.
We set off as number three in our flotilla of eight boats. Somewhere around the half-way point the tunnel narrows and the headroom is reduced. We found we were catching up the boat in front and slowed down to maintain a safe distance. The boat behind us, however,  kept steaming on until he was less than one boat length behind us. I shouted to his to slow down to which he replied "speed up" We have been passing through this tunnel for forty years and I have yet to find a way of overtaking.

After leaving the tunnel we joined the queue to start the descent of the Cheshire Locks, often called Heartbreak Hill, I know not why. 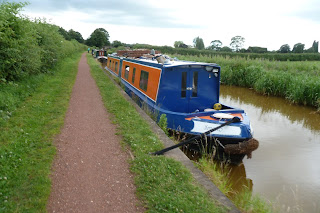 Whilst in the queue nb Smoko caught up with us and deliberately rammed us from behind. 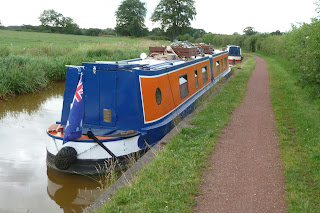 If you see this distinctive livery with the unusual flag keep well clear
- he's a prat of the lowest order.

If the population are like this guy then Argentina is welcome to them.