Half a mile from Autheley Jct where we left the Shropshire Union we leave the Staffs & Worcs canal to climb the Wolverhampton flight of 21 locks.
Just before we make the inconspicuous turn there is a monumental bridge built in traditional engineering bricks with attractive corbelling. 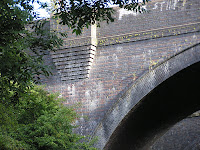 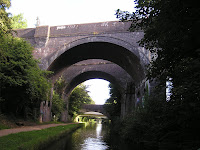 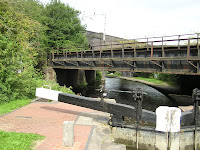 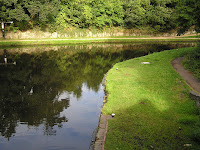 This flight takes us on a journey from the leafy rural S&W to the industrial canals of Wolverhampton and Birmingham.
Lock 20, the second one we encounter, was added in 1784 as the bottom lock was very deep. It is the only one  with a single bottom gate which avoids the need to jump across the lock when closing the gates.
It is also the one which collapsed recently (see my previous posts) but is now repaired and fully functioning. In fact the workmen were packing up to leave as we passed through - off to Doncaster next, apparently. 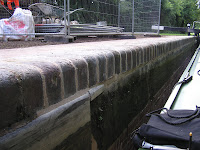 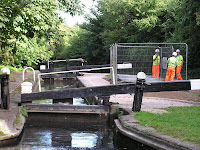 This repair has been done fairly rapidly unlike the one on the Aylesbury arm which will have taken over six months when it is completed.  Throughout all that time, I understand, C&RT has had four men on duty at the lock full time to guard it and ensure the pump is working. This does not appear economically sound to me.   Speaking to contractors working nearby confirmed my view that this repair could have been achieved in a fraction of the time and, of course, at a fraction of the cost. Well, who cares? It's only money! 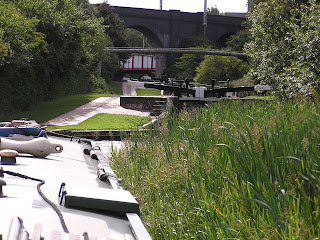 For the first three hours on the flight we met no other boats but that changed four locks from the top when we met five boats starting their descent. Here the locks are closer together with shorter pounds to pass in.
This was made more difficult by the reeds and weeds over-running the channel.
As I have said before, we have seen fewer boats out cruising this year and, in fact, followed another boat last week for the first time all year.  One consequence of this is that the weed growth which appears to be quite prolific this year is not being kept in check by the passage of boats. 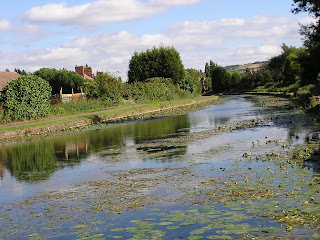 In some places the reeds have been cut but are floating on the canal ready to wind round the prop. 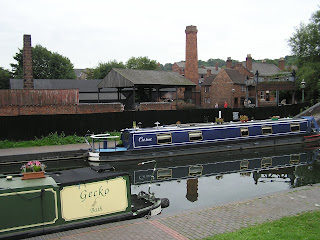 We are moored inside the Black Country Museum tonight and taking a look around during the day. 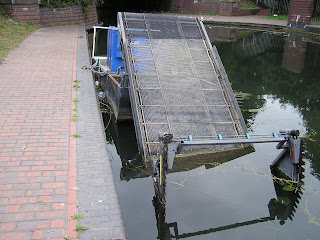 In front of us is the reed cutter !


I understand it is out of order as it gets clogged up
- by weeds!
Posted by Peter at 11:40