Set off rather later this morning which must have been a subconscious reluctance to get wet. After travelling about 10 minutes we encountered a slight obstruction. 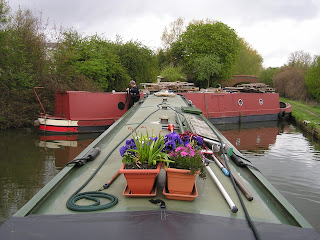 This boat had been washed loose from its stern mooning, probably by the lady who went past yesterday afternoon as if she was pulling a water skier.  M took our rope onto his stern and we pulled him back into place.

It rained fairly incessantly until we stopped at Gifford Park to collect something from the Rohan shop which I had ordered on line. (No P&P if you collect form store)
Had lunch and gave up for the day as rain has not stopped. First time we have moored here so conforms to our new regime of finding new places to moor.
Posted by Peter at 15:00