Solution to the Water Shortage
Yesterday we met friends (who also know Michael who commented on yesterdays post) at the Anglers' Retreat at Marsworth for another wonderful lunch. I had Kate & Sydney Pie which arrived with eight vegetables - one less than last time. Mrs Gecko had lamb Hotpot which was also delicious apparently.  We arrived a little early intending to take a walk up the lock flight but took a short (in distance) diversion around the Aylesbury Arm junction first.  Here we bumped into the guy (Nigel?) from Carianne who we had not seen for a few years and when we had finished gossipping with him it was time for lunch. 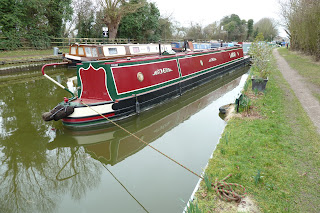 The water level here has been dropped to reduce the leakage and some of the deep-draughted boats like Larah are not able to bring the stern in to the bank. Even eight feet out she is resting on the bottom! 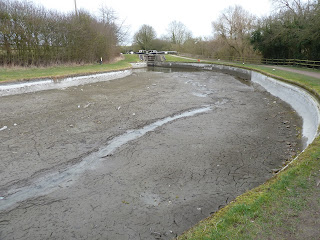 After lunch we did take a stroll up the flight with out friends. Whilst the channel is dry, the the reservoirs seem to have recovered a little over the past month or so, presumably due to the conservation measures BW has taken. 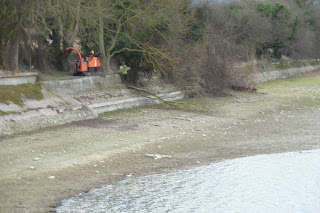 The low water level has given BW the opportunity to carry out some work which would be more difficult with a full reservoir. 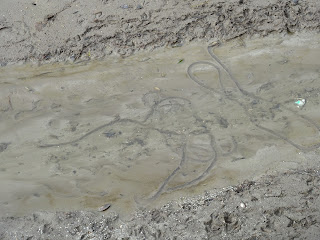 In the mud we were puzzled by  these wiggly tracks but eventually saw the Mudskippers which were responsible.

British Waterways have announced the arrangements for boat passage over the next few months which they hope will prevent the Grand Union coming to a complete stop but we are taking no chances. 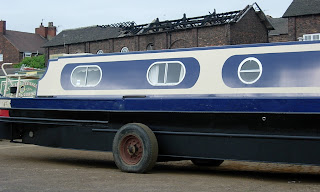 If we run out of water we will still keep going with this arrangement.
Posted by Peter at 19:10