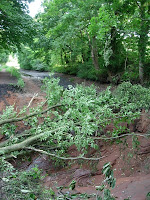 In the early hours of 7th September 2008 the Stourbridge Canal burst its bank between Middle Bridge and Wordsley Jct, where the Town Arm leaves the main line. By the time BW had managed to take emergency action to stem the flow 1.5 million gallons of water had emigrated from the canal to the River Stour. Two days earlier BW had carried out the annual inspection of this stretch of canal which has breached in spectacular fashion in the past. (On one occasion it took boats with it, I understand). No reason for concern had been noted.

The repairs were accomplished with surprising promptness. Boaters navigating the repaired section , however, complained that the channel was too shallow. Despite the volume of complaints, BW repeatedly assured everyone that adequate depth had been provided.......that is until one of their own boats became stuck. We passed down here without problem on September 2nd 2009. 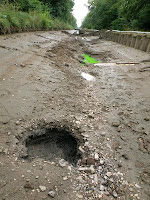 We currently have a major leak in the Shropshire Union but BW appears to be taking their time over the repairs and exhibiting a rather blasé attitude .