The Battle of Jericho (October 2008)
I first learned of the district of Oxford called Jericho in January 1987 when John Thaw (aka Inspector Morse) appeared on the TV screens in the first adaptation of the stories by Colin Dexter.
Twenty years later it appeared on my radar again when BW decided to sell the Castlemill Boatyard in Jericho to developers.
Despite opposition from the boating fraternity, the local residents and Oxford City Council, a proposal was made to build flats on the site .
On our return to Oxford last summer after a trip up the Thames to Lechlade with Robin and Carole in nb Inanda we spent a few days in Jericho. Our stay coincided with a public meeting to discuss the appeal which was about to be considered following the refusal of the original planning application. It is not uncommon when plans are made to develop canalside sites for public opinion to be split between the boaters and the local residents. Often the outcome is that building goes ahead and boaters' interests are ignored. At this meeting I attended in Jericho a question was asked of all present "do you really want a boatyard here with all the noise this entails?"
The unanimous response was "Yes we do"
If there were no other reason to oppose this development that response should have been enough!
The following pictures may help you understand the context. 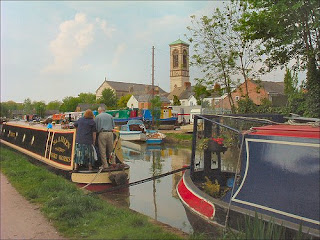 Castlemill Boatyard as it was 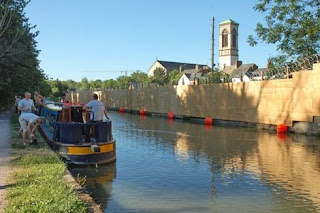 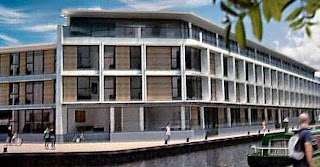 ...and how the developers see the future.


The observant readers will have noticed something missing from the future, apart, that is, from any boat life. (Presumable the bollards in the development were ornamental as they often are nowadays)
Where is the church?
The church of St. Barnabas was built in 1868/9 for the benefit of the workers at the newly relocated Oxford University Press and their families. The architect's brief was that he "should design a church to hold a thousand people for as small a sum as possible" with the proviso of course that he "should be able to produce a dignified interior, no reasonable expense was to be spared in first securing strength , solidity and thoroughly sound construction in every part; and not a penny was to be thrown away on external appearance and decoration"
The original plan was to use concrete but this was too expensive and local stone rubble was used. Although Portland cement had been used in the new London sewers some twenty years previously it was hardly a common building medium at this time . However, it did not happen that way.
The 130ft campanile which was completed in 1872 quickly established itself in the Oxford skyline and is mentioned in Thomas Hardy's Jude the Obscure and John Betjeman's poem Myfanwy. Betjeman went further and wrote a poem dedicated to the church.

St. Barnabas, Oxford
How long was the peril, how breathless the day,
In topaz and beryl the sun dies away,
His rays lying static at quarter to six
On polychromatic lacing of bricks.
Good Lord, as the angelus floats down the road
Byzantine St. Barnabas, be Thine abode.

Where once the fritilliaries hung in the grass
A baldachin pillar is guarding the Mass
Farewell to blue meadows we loved not enough,
And elms in whose shadows were Glanville and Clough
Not poets but clergymen hastened to meet
The redden'd remorselessness Cardigan Street

The artist's impression of the Jericho development is detailed enough to include some foliage in the foreground but somehow fails to indicate that the Oxford skyline would be changed irrevocably by obscuring the iconic tower of St. Barnabas.
Again I leave you with some pictures of St. Barnabas and hope that when you next go to Oxford you find time to wander between the artisans' cottages of Jericho and take a look at what a church built cheaply for 1000 people looks like. 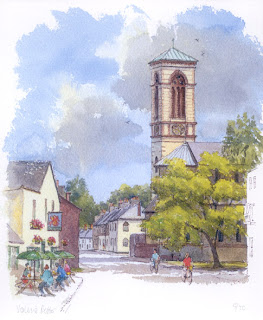 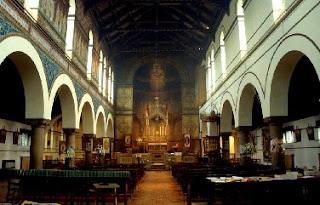 PS. The appeal was dismissed and last week the developer went into administration so the future of this site is up in the air again.
Posted by Peter at 21:22