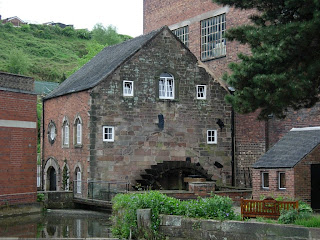 The Caldon Canal has two branches which divide at Hazelhurst Locks. We have taken the lock-free and shorter arm (and more attractive in my view) to Leek. James Brindley of whom you have heard earlier, started his commercial career at a watermill in Leek (see photo, left). This is still standing and open to the public at odd times, but not whilst we are here of course. We have known for some time that towns love to hide their libraries away but only recently have we encountered so many shy museums. This one, however, is run be volunteers so we should feel lucky that it exists at all. After looking at the mill from outside we wandered around the town and indulged in Hunt the Library. Like many towns we visit, there are no signs anywhere to assist in the game. But Leek has invented a few new rules. After our tireless, and ultimately successful, efforts in Daventry last year we have to award the prize now to Leek (or Staffordshire Moorland Council as it likes to be known). Their first ploy is to house the library in an old college building but to make the main entrance through a bridge from the new council building. In order to throw you off the scent, however there is no mention of the library on the outside of this building and furthermore THEY HAVE NOT TOLD ANY OF THE LOCAL POPULATION. Thus, when I tracked down the council building and asked a gentleman standing outside where the library was he directed me back down the street to an old college entrance where, in large letters I found I could enrol NOW for all sorts of subjects. But even this did not throw this intrepid library hunter and I ventured inside to find myself in the middle of a children's resource centre. Feeling bold, and a little worried about being of a certain age and alone in a children's area, I entered the cunning maze they have created with bookshelves. Following my ears towards the sound of human (adult) voices I burst into a clearing where a librarian was sheltering behind a desk. My sense of success soon waned when I tried to find a book. Having been brought up on the Dewey Decimal system I went in search of the 900's, But each corner I turned was headed with a large brightly coloured sign with such useful classifications as READ, LISTEN, ENJOY. Perhaps I should go back to the computer where I know where to find things.
Back in the town (avoid the chippy in the market square at all costs) I was surprised to find a shop which still bears the original signboard of Home & Colonial Stores. Some will remember this splendid chain of grocers whose success was founded on their fine selection of teas. For a few weeks in my very dim and distant past I actually worked on the deli counter of Maypole Dairies branch in Amersham (built on the site of the old Regent cinema) who bought H & C from their founder Julius Drewe. This gentleman, you will recall employed Sir Edwin Lutyens to build Castle Drogo in Devon which the National Trust claims to be the last castle built in England (1911-31). I have a feeling Drewe added an s to the end of his name at some point and was a tea taster before he established H & C. Anyway this store is an Aladin's cave of distressed stock - Dali-esque chocolate bars, breakfast cereals in Arabic packaging and esoteric and obviously unpopular flavours of well known products. It is worth visiting Leek for this experience if no other.