Going Loopy
When James Brindley built the BCN main line from Birmingham to Wolverhampton around 1769 it illustrated his established style of following contours wherever possible. It was an instant success and remained very profitable for decades. However sixty years later Thomas Telford was employed to straighten out the route. He accomplished this by making deep cuttings and reduced the distance by seven miles in the process. Brindley's route remained in use (as it does today) so that the capacity of the canal was doubled.

One of the consequences of Telford's short cut is that some of Brindley's canal remains as loops - Oozells Street, 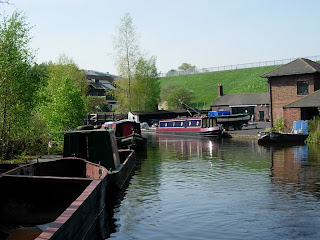 Icknield Port and Soho are three examples. We decided this morning to follow Brindley's route all the way to Wolverhampton, negotiating each of these loops in the process.
Oozells Street has been comprehensively redeveloped because of its proximity to Gas Street and is full of moored boats.
However Icknield Port Loop is a peaceful haven (there is no towpath) but may not avoid the developers for much longer.

Icknield Port Loop provides a feed for water from the reservoir 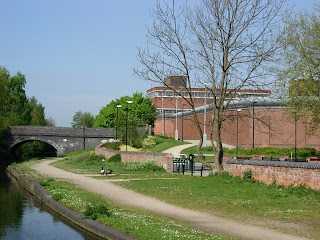 When we last visited the Soho Loop during a BCN Marathon in the 1990's (more of that another time) amongst the obstacles we had to negotiate was a partly submerged Mini in the middle of the canal. Happily the canal is much less congested now and even Winson Green prison seems to have had a facelift.
Mid afternoon we arrived at the entrance to Dudley tunnel which is unnavigable by powered craft but which provides the back door to the Black Country Museum. In the whole journey we met not a single boat.
Winson Green Prison
Posted by Peter at 21:25